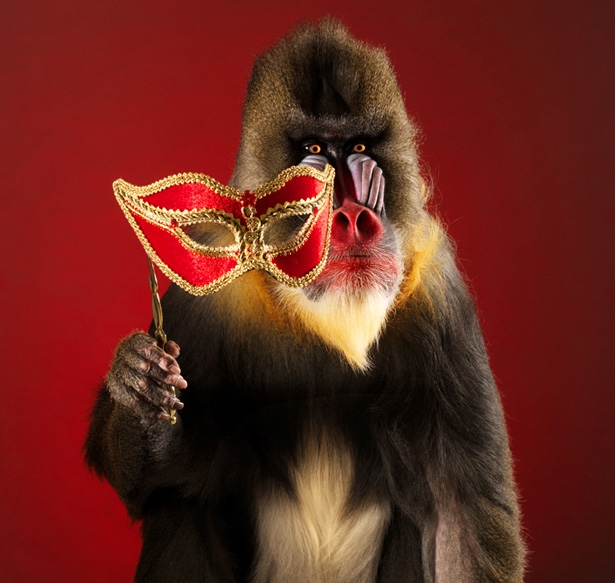 Back in 2006 Altpick.com interviewed photographer and animal lover, Lennette Newell, about how she grew up surrounded by animals and how she got her start in photography, including some of her early challenges. Six years later it’s time to learn more about how Lennette produces these extraordinary images. In our dialogue, Lennette’s answers returned regularly to the relationship, the interpersonal communication. There are things that, perhaps, all of us could learn from, in her working with animals.

AP: I’d like to know more about your experience working with animals.

My reverence for nature evolved while growing up on the high plains of Western Nebraska, a daughter of a large animal veterinarian and cattleman. Horses, cattle, dogs, cats, peacocks and a pet skunk were an integral part of my childhood. I could probably ride a horse shortly after walking and horses became a wonderful outlet to my life. Encouraged by my father I became a keen observer of animal behavior. I became the connection with the wild animals brought into the hospital. I had the intense curious interest in connecting to gain their trust so they could be treated and often spent nights with them in hopes of a healthy outcome. I was not only a nurse but also a soul mate in a sense, oftentimes struggling with why the animals were there in the first place. Didn’t other people see what I saw, felt?  Who would set a trap for a fox, can’t we live in harmony? I gained life lessons by these many experiences in my ability to read and adapt to animal behavior.

It is this sense of place and experience that has forged the look of my animal portraits; I try to emphasize their innate physical and emotional honesty.

Are there any animals you would prefer not to work with?

No, I would love to shoot all animals and consider every opportunity a privilege.

What animal haven’t you worked with yet that you would really like to?

Has it ever become impossible to work with an animal during a shoot? If so, why?

I take great care in researching the challenges required for maintaining the subjects comfort zone.  The environment is then carefully orchestrated to invite a positive outcome. 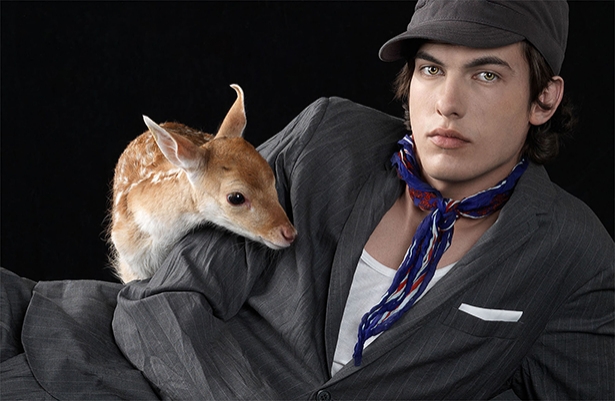 You don’t just shoot animals alone. In much of your work there are humans present. What are the challenges of shooting a model with an animal?

If the animal is domestic it is easier, careful consideration is given to talent if they own a pet, if not, sometimes we bring in pets for casting to see how individuals will interact.

If the animal is exotic it takes more conversations, meetings, castings to find the right connection, as with Paulo the male painted like a baboon who posed with the baboon. It was his childhood dream to be a baboon. He is also a dancer, which enabled him to give us such wonderful, graceful shots and to sit in unison with the baboon. 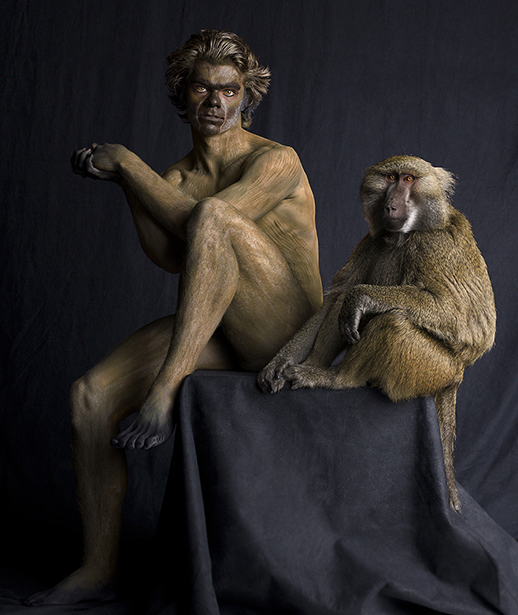 How is that different from shooting just the animal? What is necessary to help make their relationship work on film?

Anytime you are working with more than one subject in an image you want there to be a genuine connection so it relays the emotion or message you are trying to convey.  As noted above, due diligence in casting is key.

Do you ever do composite prints from separate sessions to get the model and the animal together in the image?

I do shoot many of my shots in one shot to capture the true emotion. The cheetah ani-human images are all one shot as are most of the ani-human series.

There is careful consideration given to the images that need to be captured in two shots, angle, light, etc.

What was your most challenging animal shoot to date, with or without a model?

I feel comfortable in situations with complex elements and emotions. Maybe it comes from my childhood nurse training (as I call it);  remaining calm, assessing the situation and reacting accordingly are very relevant when working with animals.   The simple looking straight on shot of a dog’s face; with eyes that display intelligence, engery and emotion requires that I supply that energy and emotion while she/he remains still for the ‘wow’ portrait I do for many packaging assignments.

What is the longest you had to work with an animal to get your shot.

With animals and kids, it is essential to understand the time you have before you start the day. They can only give so much and then it will be senseless in forcing the situation. I always use a backup if possible or other means to have set/light ready so the talent is fresh and ready to go when they hit the set and we are in fire mode as well.

I assume some animals can’t come to your studio to be photographed. What is the most unusual place you had to go to, to shoot an animal?

While I have gone to zoos, sanctuaries, farms, etc.,  I believe one of the more out of the ordinary shoots was photographing a sea turtle for a Nintendo project. I connected with the organization Pro Penisula, now part of the Ocean Foundation for their expertise input.

They capture sea turtles during certain times of the year, in the Gulf of Baja California, to tag them for migration and health data; and were happy to let me photograph a sea turtle with Grupo Tortuguero. Chuy was my experienced conservation specialist and guide.

It was most exciting as we went out very late (after dark) to set the net via a row boat and then went out early to see if any had accumulated.  It was most exciting, as they had caught a large turtle that was untagged, this made Chuy’s day, too. I only had a few minutes to shoot the captured adult (which I got to name), as they did not want him to be stressed. The trip was magnificent all the way around, learning about the Pro-Pensula’s mission and working with local people who tirelessly work for the conservation of sea turtles; nice to give back as well.

During an assignment, what animal encounter gave you the most satisfaction, as to having established a relationship between you?

I feel very fortunate to have experienced many wonderful encounters!  Suzy, an extremely intelligent, gentle, very large African elephant; the black leopard on location with whom I came very close to being too close.    A memorable assignment for Eukanuba involved photographing dogs with distinguished accomplishments; including, Arras, a smart fiercely loyal German Shepard police dog in Ohio and Bella, the personable Australian Shepard in California, who helps teach children the joy of reading via sign language.

In conclusion I would like to ask, “What has working with the animals taught you that you now apply to some other part of your life”? 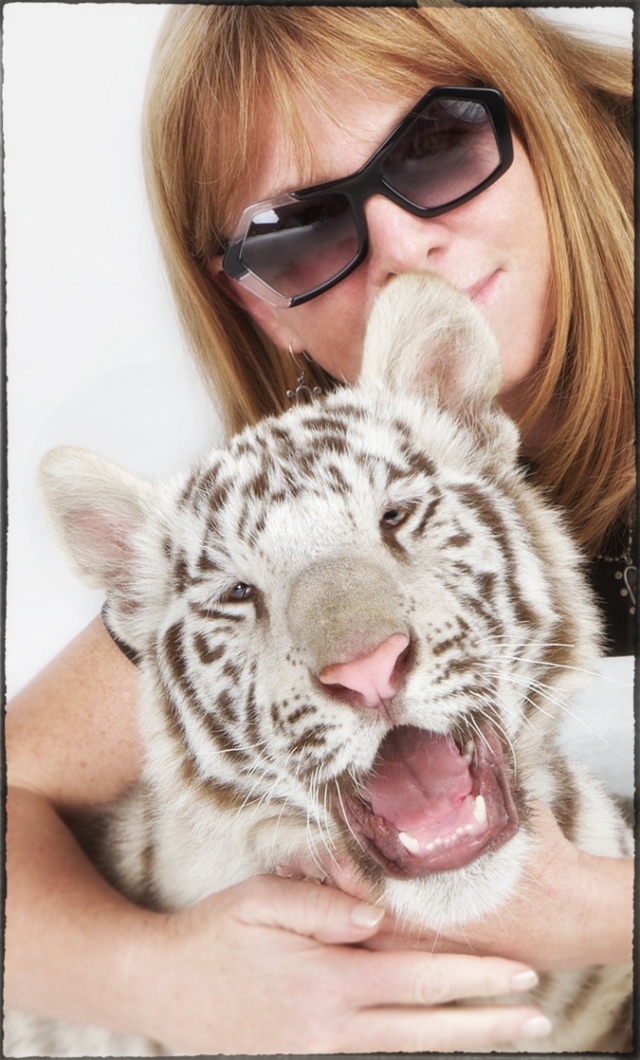 Many of the species I have photographed are rapidly becoming extinct, primarily as a result of human population growth and the resulting environmental degradation.

The pressure on wildlife in many countries for human survival is enormous. Modern global domestic livestock production requires energy, water and habit destruction that is unsustainable.

To be part of the solution I try to minimize my  impact on the environment by eating lower on the food chain. I support wildlife and habitat advocacy groups and when my schedule permits, foster cats and dogs for Animal Rescue Foundation.

Interview by our Italy correspondent, Carol Schultheiss in Cavallini.

See more of Lennette Newell’s work on her website and Altpick.com.

Established in 1992, The Alternative Pick commenced with a clear mission, providing creative buyers with a vehicle to source the best brightest and most exciting illustrators, photographers, graphic designers and animators in the business. The Alternative Pick sourcebook (1992-2005) became the outlet for cutting-edge commercial talent, offering a unique platform for artists to showcase their work. The Alternative Pick Deck (2009-2012) offered a fun and engaging format for locating leading commercial artists. In addition, The Altpick Awards (2003-2011) introduced yet another way to provide a platform for talents to shine. To meet the demands of an ever-changing industry, Altpick.com was launched in 1996 and presently provides a vehicle for talent to utilize the web to connect more effectively with buyers. As we mark our 30th anniversary in 2021, Altpick.com remains a premier source for creative professionals and we plan to continue to push the envelope providing the best vehicle for buyers to connect with creative talent.
View all posts by altpick connects →
This entry was posted in Photography and tagged African Elephant, Ani-Human, Animal Rescue Foundation, animal veterinarian, animals, baboon, black leopard, lennette newell, Ocean Foundation, photography, White Tiger, wildlife. Bookmark the permalink.