Posted on December 14, 2016 by altpick connects

On November 28th, Altpick-writer and illustrator, Andreas von Buddenbrock, went to Miami, FL, for the annual  ‘Art Week’. What follows is a description of his experiences and observations, rather than a review of the fairs themselves. Illustrations made for this article only reflect the artist’s personal view of the various artworks presented, and Andreas insists that they should be experienced in real life.

Art is certainly “in the air” as Miami starts one of it’s busiest weeks of the year. Not only is it the week for Art Basel’s annual American outing, but it’s also one for a great number of satellite fairs spread out all over town. As I’m walking along Miami’s South Beach, it’s hard not to notice the gigantic white tents that have been set up on the pale beach sand for exclusive art exhibits such as “Scope” and “Untitled”. Bringing to mind giant, white barns, their elongated shapes rest peacefully along the clear blue ocean front. Everywhere I go, people who have flown in from all over the world seem to be discussing the latest show they saw or the upcoming event they’re going to. As the night rolls in, the sprawling area of Miami Beach becomes even more alive, as bars and restaurants hosting nightly shows and VIP parties fill up with people. It’s a luxurious setting, for sure, but there’s definitely room for everyone; older, established artists and high-end collectors rub shoulders with up-and-coming painters and sculptors, creating a versatile mix of old and new, famous and unknown.

But the star of the show, of course, is Miami Art Basel, showcasing more than 250 galleries from 31 different countries. Hosted inside the ginormous Miami Beach Convention Center, Art Basel serves as the nucleus of this contemporary art week, with visitors pouring in and out of the building’s four major entrances like blood cells moving through a beating heart. After a public opening in Collins Park the night before (including public ‘Ground Control’ -themed performances in honor of the late David Bowie, and grilled food being served from the flaming hood of a limousine), traffic outside the convention center keeps on getting thicker by the hour, as people compete to “up-street” each other in a relentless, and often fruitless, chase for vacant cabs. 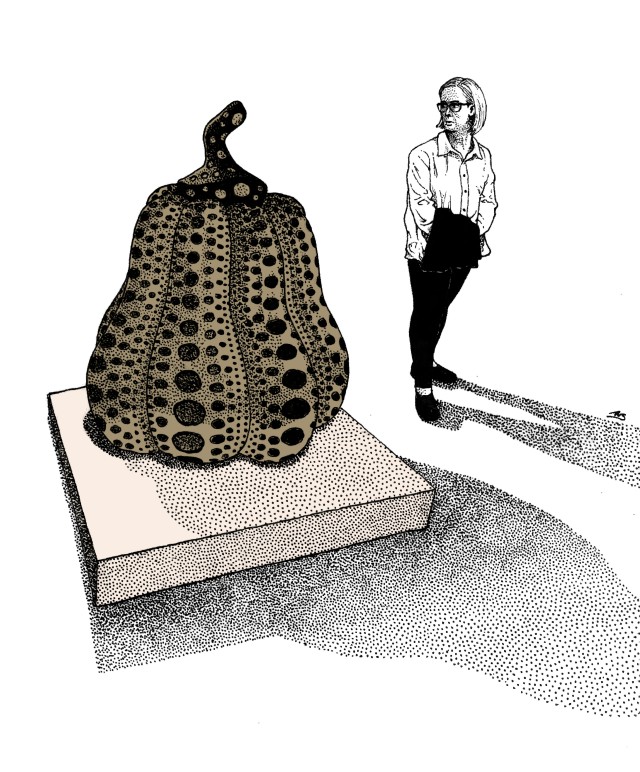 Fortunately for us visitors, however, the inside of the fair does not reflect the chaos of the outside world; sure, people stream through the center’s corridors in opposite directions, occasionally bumping into each other with muttered apologies, but the mood in here is much less stressful. Most likely, this can be credited to the setup of the show. The fair, as it turns out, is made up of long hallways that together form a unified set of rectangles, getting smaller in size the further you go towards its core.

It’s a maze, in a sense (“Westworld”, anyone?), but simple enough for only the worst navigator to get lost. At its centre, as well as its very edges, restaurants and cafeterias have been placed for people to eat, drink and re-energize themselves before continuing on with their treks throughout the gigantic art-space. Additionally, this can also be achieved in the various little ‘parks’ that have been placed with great care throughout the show; walled off by knee-high wooden benches, these green knolls of grass and trees form smaller islands between the infinite row of artworks for people to rest their eyes and feet, away from the walking crowd.

In terms of the art itself, there is certainly a lot to take in – a common criticism about these type of fairs. The sheer amount of art, whether appealing or not, is constantly coming at you from left, right and center and it does at times feel a bit overwhelming. But as much as it may flood the brain with visual information, it can also be argued that these kind of events calls upon a mode of effective screening, regardless of whether you intend to buy or not; it forces you to quickly come to grips with what appeals to you, and what doesn’t.

Not to mention, if you’re an artist, the incredible amount of inspiration that can be found. Art Basel is a fair that, along with its many satellite shows, may help its viewers (if they’re willing to pay attention) understand themselves just a little bit more, and solely for that reason, it’s worth coming back to.

To see more of Andreas’ work visit his website and Altpick page.