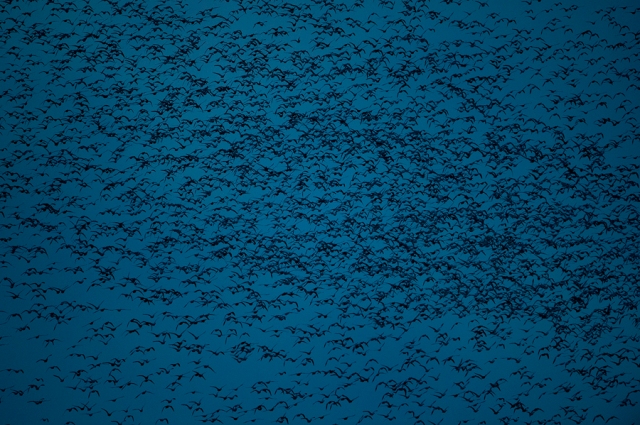 I grew up in Nebraska loving the land, the people, the wildlife. It wasn’t until I went away to college that I realized most Americans think my home state is, well, homely.

When our family finally got a television set I was confused because the helpful commercials would announce 9 Eastern, 8 Central, and 6 Pacific. Why no Mountain Time zone? And then I painfully figured out that I lived in a fly over state.

I’ve spent a lot of time flying over a lot of places.

What I had never done was put myself in a position where tens of thousands of birds would fly just above my head as they make an ancient journey along routes that far predate men’s presence on the Earth.

When I was three our family was enjoying a picnic on the banks of the Platte in the shadow of Scotts Bluff when I toddled off and decided to chase a duck into the river. The river isn’t mighty, or swift, or deep. But it was more powerful than my young legs. I don’t remember much about it, but my mom told a terrifying story of watching the current pull me under. Somehow they got me out, not too much the worse for wear.

So just a few, okay, maybe five decades later, when I was wading out to a sandbar in that same river carrying a heavy Gitzo tripod, and a Nikkor 600mm f4 lens it was rather unsettling when I found my foot sinking into deep, soft mud. I couldn’t drop the tripod, or the lens so I had to pull my foot out of the hip wider and continue across the unpleasantly cold river.

We had a pop-up blind tacked down on the small piece of land right in the middle of the Platte. We knew there was a whooping crane in the area, and we knew the sandhill cranes and snow geese were maybe 30 minutes from starting to glide down to their overnight resting places. I was soaked. But no time to head back to get dry clothes. It was going to be a very long, cold night.

But what a night. I have been in many places — all 50 Americans states, 138 countries at last count, and every continent except Antarctica so I’m pretty confident in saying I am well-traveled. I’m comfortable saying that being on this piece of sand, in the middle of the first river I knew, on a bitter March night, drenched to the bone was one of the most magnificent experiences I’ve enjoyed in nature. 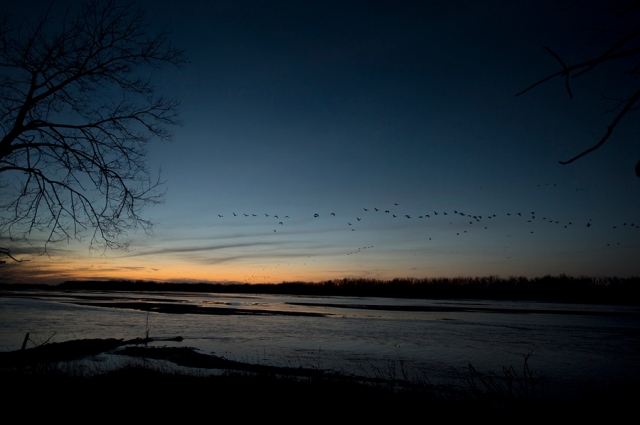 We were facing due west. The sunset was full, bright orange. The sky crystal clear. As it went from a glorious yellow intensity to a full deep royal blue, a sliver of a moon gracing the pre star filled night, the birds appeared. A handful tentatively dropped to their roosts, then the noise increased, the sky was full of soaring, gliding black, honking birds. Impossible to count but likely 50,000 of these gangly, magnificent prehistoric creatures swirled overhead and settled in to join us overnight on the flat, wide river the water coursing a foot from our blind. 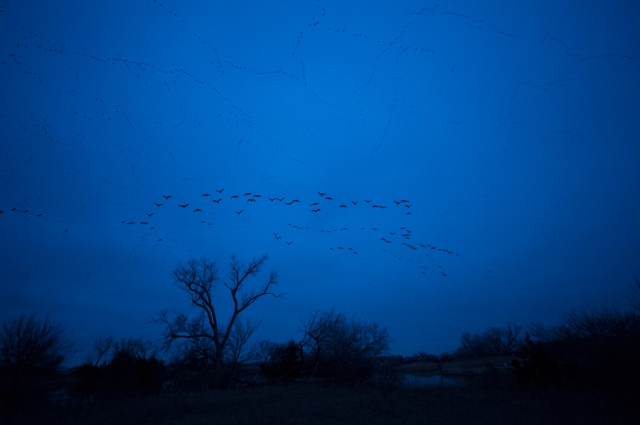 There were no people close, and it was a dark, dark night but it was far from quiet. The sound was almost deafening, yet soothing.

Around 4 a.m. we had visitors. A small herd of deer splashed out across the channel to stand inches from the tent. Nothing scary but a little strange to look out through the tent windows at the dark, questioning eyes of those gentle creatures.

As the sun slowly crept up in the eastern sky, Laura made incredible video images of the graceful creatures in flight. I sat spellbound trying to do the same.

Full circle. And I can’t wait to get back next year. It’s my migration. Home.

To see more of Bill Frakes’ work go to his website and Altpick page.

Established in 1992, The Alternative Pick commenced with a clear mission, providing creative buyers with a vehicle to source the best brightest and most exciting illustrators, photographers, graphic designers and animators in the business. The Alternative Pick sourcebook (1992-2005) became the outlet for cutting-edge commercial talent, offering a unique platform for artists to showcase their work. The Alternative Pick Deck (2009-2012) offered a fun and engaging format for locating leading commercial artists. In addition, The Altpick Awards (2003-2011) introduced yet another way to provide a platform for talents to shine. To meet the demands of an ever-changing industry, Altpick.com was launched in 1996 and presently provides a vehicle for talent to utilize the web to connect more effectively with buyers. As we mark our 30th anniversary in 2021, Altpick.com remains a premier source for creative professionals and we plan to continue to push the envelope providing the best vehicle for buyers to connect with creative talent.
View all posts by altpick connects →
This entry was posted in Altpick, Photography and tagged ancient birds, bill frakes, birds, cranes, diana robinson, documentary, laura heald, migration, nebraska, nj currie, paul johnsgard, photography, strawhat visuals, tom lynn. Bookmark the permalink.