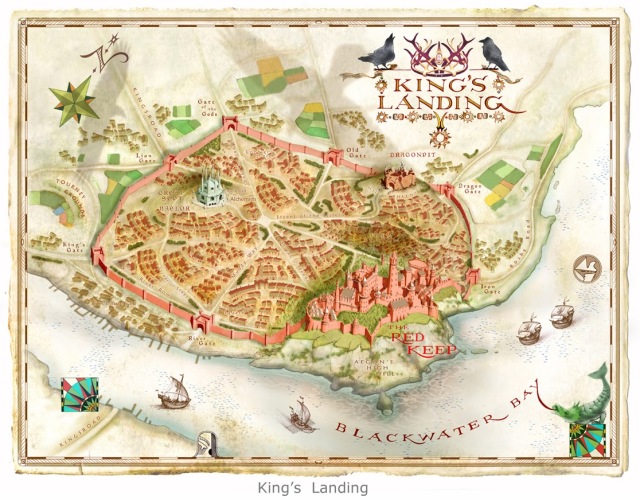 A.  Can you give us a brief explanation of the World of Ice and Fire book?

M. As is rarely the case in the fantasy genre for any need or interest in a history, George Martin, along with Elio M. Garcia, Jr. and Linda Antonsson have compiled the whole history of Westeros and some of Essos. How this book further expands the genre, is how the story is told. Along with a factual history (or as much so that you might find in fantasy), it’s a compendium of stories, myths and legends told by a maester roughly 100 years before the events of the ‘Game of Thrones‘.

A. How did you get involved with this project?

M.  As a freelance illustrator, I’d been working for Random House for some time before George came around in search of a map illustrator.  He too already had a long past with Bantam Books (imprint of RH who puts out his books).  By that time through commissions from Bantam, I had assembled a few sets of maps for various titles.  It’s funny, thinking of it now, the maps he saw then of mine which made up his mind, were a few I drew for a book called Ironfire, a story of the last Crusades. (Ironfire, Ice and Fire,…should I be worried about pigeon holing here?)

What might be interesting too, is this was 2006 when I was first commissioned to do these maps, kicking around some visuals based on a lot of uncertainties. But for reasons that are standards within Martintime, the real production of things didn’t get roll’n for me until 2011, when HBO’s series opened up all and any stopgaps.

A. Did you, or any other authors, work with George Martin at any point and to what extent?

M. What contact I had with George was early on in the project when we were introduced through Random House – a few phone calls, and a few emails. As for other illustrators, I can’t say. I believe there were 22 of us involved. I do know that Ted Nesbath, the painter of all those fabulous castles in the book, has worked with George on quite a few projects.

A. Did you use the novels’ map artwork as a guideline?  How much deviation was there from the source material?

M. When acting the cartographer, typically one abides by what is stated by the church and state (in this case the author), having the power to adjust land mass according to the level of power, or unless of course you’re currently involved in rendering boundary maps between Israel and Jerusalem. Initially, George provided me with all his earliest sketches of Westeros and the other worlds. There was a lot that didn’t exist at first until George got more writing into the heart of these places, which then were passed on to me.

A. Tell me about your passion for cartography and botany.  Any other projects in those fields?

M.  I’d say that maps are a slow developing passion of mine, by now a much more realized one in my practice.  I’ve always liked and understood maps, found early on that besides the geographical form of a place, a lot more of its story could be told right there within the picture plane. Bingo, a means to get through school without always having to write reports. It was amazing to me, the ease to which my maps were accepted in a variety of course. So it’s no surprise to me (well it is, but for different reasons) that only recently (10-12 years) maps would come back to me. I love it. The Botanicals, lengthy as well, another time. But I will say, it’s an odd bit of art behavior to take on the study of Ice Plants in Miami. (more on that on my blog… www.bamboo2studio.blogspot.com

Established in 1992, The Alternative Pick commenced with a clear mission, providing creative buyers with a vehicle to source the best brightest and most exciting illustrators, photographers, graphic designers and animators in the business. The Alternative Pick sourcebook (1992-2005) became the outlet for cutting-edge commercial talent, offering a unique platform for artists to showcase their work. The Alternative Pick Deck (2009-2012) offered a fun and engaging format for locating leading commercial artists. In addition, The Altpick Awards (2003-2011) introduced yet another way to provide a platform for talents to shine. To meet the demands of an ever-changing industry, Altpick.com was launched in 1996 and presently provides a vehicle for talent to utilize the web to connect more effectively with buyers. As we mark our 30th anniversary in 2021, Altpick.com remains a premier source for creative professionals and we plan to continue to push the envelope providing the best vehicle for buyers to connect with creative talent.
View all posts by altpick connects →
This entry was posted in Altpick, Art, Illustrations and tagged Bantam Books, botanicals, botany, cartographer, Crusades, Elio M. Garcia Jr, Essos, Game of Thrones, George R.R. Martin World of Ice and Fire, HBO, History, Ice Plants, Ironfire, Linda Antonsson, maester, maps, Martintime, michael gellatly, Novels, painter, Random House, Ted Nesbath, Westeros. Bookmark the permalink.