Emiliano Ponzi’s artful conceptual illustrations cross language barriers and cultural divides in their concise yet playful simplicity. The past year has been a momentous one for him, in addition to winning top honors from some of the industry’s most respected associations and exhibiting his work in a number of cities around the world, he has received international press, including a documentary about his work for Swiss television.

Emiliano’s illustrations can regularly be seen in the pages of The New York Times and other newspapers. His recent piece for the Sunday Book Review’s feature on Emily Rapp’s book, The Still Point of the Turning World, provides a somber yet beautiful treatment for the autobiographical story of a mother and her terminally ill child. Another unique piece (check it out – it’s animated) for the Opinion Page ‘goes green’ in response to a recent article about the economic benefits of a federal climate policy. Last year, The New York Times’ Manhattan office presented a solo exhibition of some of Emiliano’s most successful pieces for the newspaper. Curator and Art Director, Nicholas Blechman, said “These illustrations answer perfectly to the Munari principle, for whom the designer must be able to answer with humility and talent, the questions made by the society in which he lives.” 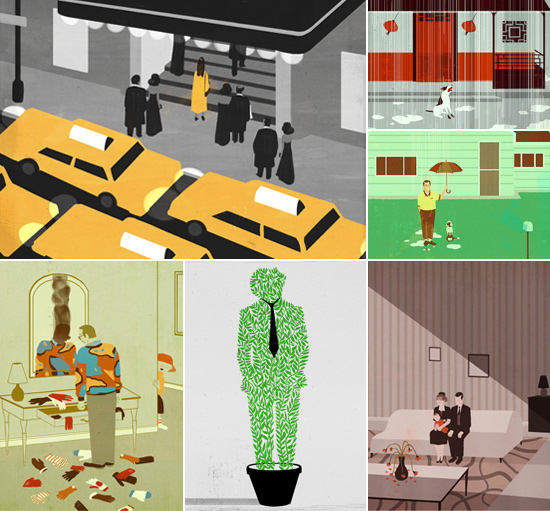 ABOVE: All illustrations from The New York Times

His editorial work includes recent covers for Computerworld and the Pennsylvania Gazette, as well as assignments from The New Yorker, Runner’s World, More, and PCWorld. His illustration of two tanks takes a clever approach to the The New Yorker’s article about the battle between Amazon and traditional book publishers, while another piece for PCWorld’s report on ‘rescuing’ your data from Google features a superhero character, offering a solution that is both charming and witty. The illustration was also animated for the iPad edition of the magazine (see it here).

Another project for UK-based shopping tourism company, Global Blue, had Emiliano illustrate a series of covers for their European shopping guides. The eye-catching Stockholm guide features a bold, graphic illustration that celebrates the cutting-edge menswear that Sweden is becoming known for. The series also includes guides to Madrid and Barcelona, Frankfurt and special luxury editions for Berlin and Rome.

ABOVE: Shopping guides for Global Blue

One of Emiliano’s biggest recent assignments came from Italian publisher, Feltrinelli, who tasked him with creating covers for the Italian language editions of German-born American writer Charles Bukowski’s novels, poetry and short stories. Bukowski, famed for his gritty, explicit style of writing, depicted “a certain taboo male fantasy: the uninhibited bachelor, slobby, anti-social, and utterly free” said Michael Greenberg of The Boston Review. The illustrations Emiliano created needed to communicate both the titles and Bukowski himself and they succeeded in doing so. The series, which includes nine titles so far, has already earned Emiliano a coveted Gold Cube from The Art Directors Club 92, a Gold Medal from the Society of Illustrators of New York 59, inclusion in the American Illustration 32 annual and a front page feature in Italy’s largest newspaper, La Repubblica. Clickhere to see an animated video teaser for the series. 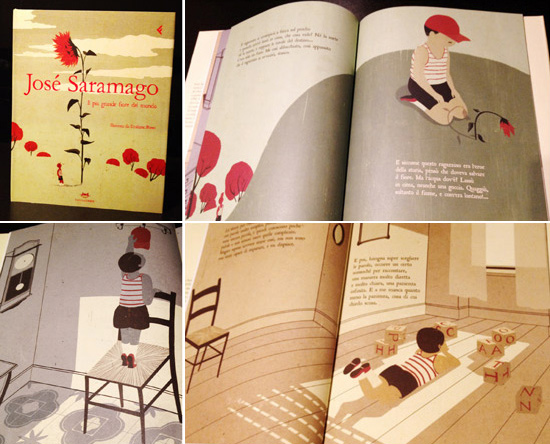 Feltrinelli Kids, chose Emiliano to create the illustrations for Nobel Laureate Jose Saramago’s first and only children’s book, Il più grande fiore del mondo (or The Biggest Flower in the World). When describing his work for the book, Emiliano says “I […] mostly worked with wide/empty spaces so children could imagine what they don’t see in my illustrations. There is a lot of ‘air’ in the book and some details represent fragments from my personal childhood memories, such as my grandma’s house floor or the t-shirts I used to wear when I was a little boy.”

Another publishing project sprung from a New York Times editorial assignment. Originally appearing with the newspaper’s review of Francisco Goldman’s book Say Her Name, the hauntingly beautiful illustration was later licensed for the Grove Atlantic US paperback and UK editions, the French edition (Editions Bourgois) and Dutch edition (Lebowski Publishers). The touching memoir of a man whose bride dies tragically while surfing went on to win the French literary prize, the Prix Femina Étranger, while the illustration made the AltPick Editor’s Choice list.

A similar situation spawned a packaging project. Emiliano’s somber illustration of the infamous Russian empress, Catherine the Great was noticed by a brewery with an interesting project. Portsmouth Brewery’s annual ‘Kate the Great Day’ marks the only day of the year that the Great Russian Imperial Stout is available, attracting crowds from all over New England with many waiting in line overnight for a chance to sample what Beer Advocate magazine calls the “best beer in America.” The tongue-in-cheek illustration appeared on the beer’s label, as well as souvenir pint glasses and t-shirts.

ABOVE: Artwork created for Design Time, the main exhibition at the 2012 Beijing Design Fair

Emiliano had the opportunity to present his work internationally as part of Design Time, the main exhibition at the 2012 Beijing Design Fair. His illustrations provided the backdrop for the show which was conceptualized by Italian design studio, Migliore + Servetto, and showcased how Italian industrial design has embraced all aspects of everyday life. Emiliano’s work again took center stage in the Suspension of Disbelief exhibition at Rome’s Wunderkammern Gallery. His piece, Sunrise Hotel, was the result of a collaboration with Italian artist, Giacomo Benelli. Viewers were invited to peer inside nine of the hotel’s twenty-eight windows and witness the guests of Sunrise Hotel, from celebratory newlyweds to a woman scorned. In his coverage of Sunset Hotel, Rob Alderson of art and design blog, It’s Nice That, said “Emiliano has produced an extraordinary set of scenes glorifying in the seediest parts of society’s underbelly. With sex, death and neglect all present and correct this is an interesting project about the perseverance of private vices in an increasingly public society.” Other exhibitions included TOWNIES: An Exhibition of Illustration from the New York Times Opinion Blog and a display at the MoCCA Arts Festival in New York. 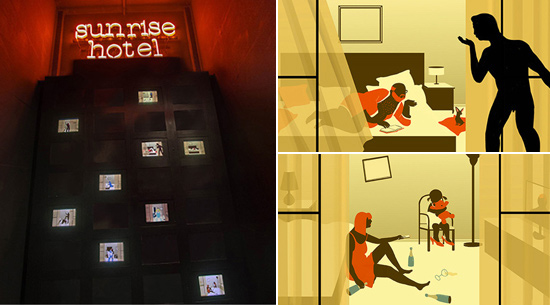 ABOVE: Artwork created for Sunrise Hotel, part of the Suspension of Disbelief exhibition Wunderkammern Gallery

Emiliano and his work were the subject matter of Sense and Sensibility, a short documentary from director Fabio De Luca for RSI, a Swiss television network that specializes in Italian programming. In the 7-minute documentary Emiliano discussed the unique texture of his digital illustrations, his thoughts on creativity and the universal appeal of his work. A selection of his most-popular illustrations were also animated for the film with Emiliano actually stepping inside and interacting with his work. He says “They were very interested in building a story around my job and the way I feel it. Not just a usual documentary but something more, a view that could show both the inner and the outer side.” Visit Emiliano’s website to to watch the video with English subtitles and to see some behind-the-scenes photos. Other press includes a recent appearance on Italian music television channel, DeeJay TV, and an interview on Italian radio show, RaiTunes. During the interview, RaiTunes live streamed a drawing demo by Emiliano online. See the video here. 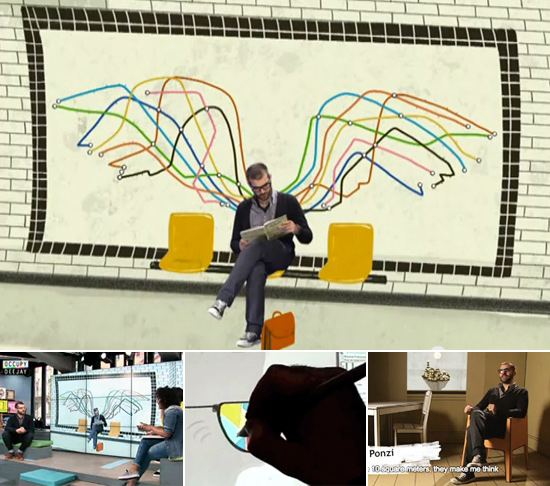 Use three words to describe your style.
Universal, synthetical, easy to read.

In an ideal world, you would have an infinite amount of… ?
Money.

What are some of your interests and hobbies outside of illustration?
Nothing too odd: hanging out, reading, watching a movie, running.

What is your ideal assignment?
1. A narrative topic without many bonds
2. Great art direction that leads me in the right direction without being too imperative
3. A very good fee

What’s the best way to get over a creative block?
Smoking a cigarette on the balcony or distracting the mind and hanging out with someone.

What is your favorite part of living and working in Milan?
Milan is the only city in Italy where you can breath an international atmosphere. There are many people here I have things in common with. On the job side mostly the editorial and advertising industry is located in Milan so it makes it easier to interact with them. On the living side you could have some benefits of staying in Italy but with a look to the outside. It’s  a sort of bridge city.

Do you have a favorite movie?
I have more than one, Women on the Verge of a Nervous Breakdown by Pedro Almodovar, Annie Hall by Woody Allen…

How has the illustration industry changed since you became a professional illustrator? How do you see it changing in the future?
I guess that the references changed. I started around 2001 when the visual trend was more realistic. Illustrations on average were more detailed and naturalistic. Now vector based and flat images are mainstream and the border between graphic and illustration are thinner than in the past and illustration direction is more minimal. I don’t know what other subtraction will be possible in the future so I think that rather than being more synthetic it will simply change in other direction connected to the switch between a static illustration and a moving image.

What is your biggest challenge as an illustrator?
Last a lot, being able to interpret the audience feeling along the decades.

Your ideal vacation spot?
A place where I can unplug my mind, hopefully somewhere I’m not able to speak the language or access to the web.

Who are three artists you admire and why?
Fortunato Depero was a Futurist painter. He designed many of the greatest posters during the first decades of the 1900′s. His style and technique gave a new shape to the advertising industry helping to build modern imagery of applied arts. Edward Hopper was able to enter into the intimate emotions of normal people, daily gesture loaded with extraordinary meaning. I love his environments and scenes. David Hockney learnt all the lesson from the past and added the ‘pop’ culture and colors to his visions.

Best way to end a long day of work?
Three possible great ways:
1. Going out doing something interesting and exciting
2. A long walk in the neighborhood
3. Laying on the couch with a book or watching the TV zombie style