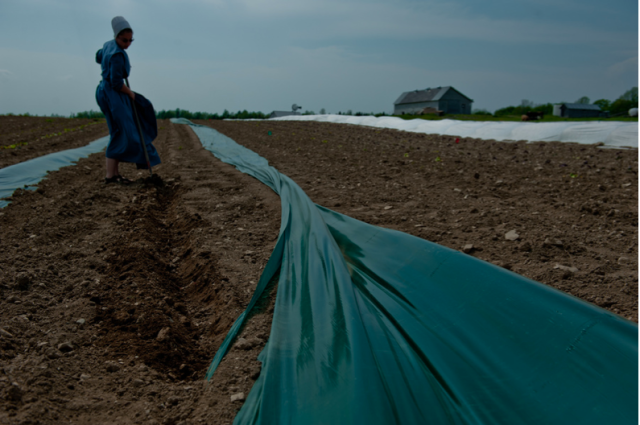 During the summer and fall of 2011 I started working on a photographic project in Smyrna Mills, northern Maine, about 15 minutes from the Canadian border. I’m looking forward to visiting the Hilty’s during the winter and continuing this project. During my time on the farm on Fox Run Drive I would live, eat, work, but mainly photograph a family who care deeply about farming sustainably. I’ve worked previously on farming stories trying to remind people about the vulnerability of the family farm, but with this story I wanted to remind people that there is hope. Sustainability and stewardship are synonymous in my book. The Hilty family are evidence of this.

In the Hilty household life works in circles. Food at meals is passed around the table in a clockwise circle; while questions regarding the morning’s bible reading come around the table in an anti-clockwise direction. The seasons impress their own circular influence on the family’s market gardening business and their method of farming cycles the soil through a process to ensure the soil is enriched rather than stripped. Perhaps most importantly, the family’s philosophy on farming for the future generations speaks to an over-arching cycle.

Milo and Velma Hilty and their family of five moved to an old abandoned dairy farm covered in wild strawberries and paintbrush in Smyrna Mills, Northern Maine in the spring of 1996. They run “The Back 40 Growers” farm-stand on route two, which houses the produce of eight Amish families and they sustainably and organically farm 20 acres of predominantly vegetables which they supply locally and also to Bangor and Rockport. 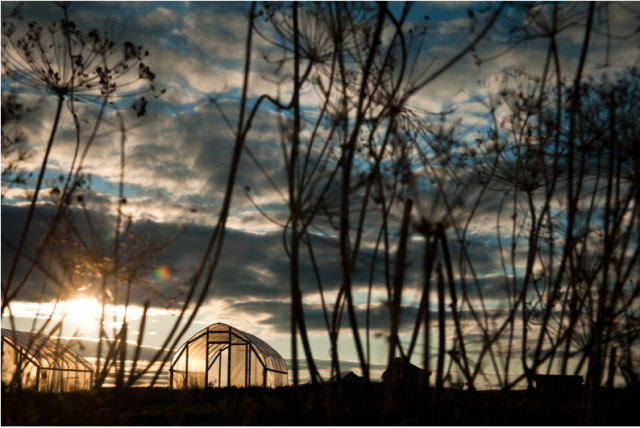 Milo realizes that “sustainability” and eating locally is up in people’s consciousness much more now than 20 years ago. But they aren’t on the sustainability bandwagon because its trendy and they can pocket more by waving an organic, sustainable flag. The Hilty’s believe the Lord intended us to be stewards of the land. Their philosophy is to work with the land instead of against it and they don’t want their children to have to find answers for the problems they’ve created by farming the land to excess.

Betty, the youngest daughter, runs the farm-stand. They have a faithful local following many of whom turn up in advance of the 9am opening time, especially in the early part of the tomato season. Truck drivers pull over to pick up produce as they return home from driving across state (their trucks dwarfing the farm-stand); some use the butterhead lettuce as floral arrangements; two men drive up once a month from Bangor (one and half hours drive away) to stock up on fresh produce; one woman buys up three bags of peas (all the peas that are left), but splits them with another woman who shows up after her and is disappointed all the peas are gone; most people leave with four or more shopping bags of produce – with the desperation for peas and tomatoes and the number of bags on a customer’s arm as they leave the farm-stand it could well be akin to a Macy’s New Year’s sale (minus the stampeding and aggression).

Two things are apparent from the time I spend with Betty in the farm-stand. First, people shop here for the quality of the produce. They know how it is produced and they buy it for its method of production (an actual certification isn’t necessary), its taste and the honesty and integrity of the families they deal with. And second, even in a back 40 Amish farm-stand 15mins from the Canadian border where a sign on the door asks you to tie your horse up elsewhere, you can’t take the American away from their beloved donuts. Nearly every patron picks up one of the Taste of Home Bakery’s glazed donuts as the last item to add to their bounty of fresh vege. Its easy to think that this type of sustainability is only possible in America’s back 40; in a culture that shuns mechanization and “modernity”. However, with the growing consciousness of sustainability there are individuals and groups all over the United States that are applying the principles of sustainability and stewardship to their farming practices – from CSAs to urban rooftop farmers.

As I say goodbye to Betty and pack up my gear getting ready to drive home a young blond girl brings in a bushel of carrots from her family’s farm to sell at the farm-stand. Her fingernails and the pores on her face are laced with dirt. She is the next generation of farmers. Her name is Faith.

To see more of Lottie Hedley’s work, go to her Altpick and her website.

Established in 1991, The Alternative Pick commenced with a clear mission, providing creative buyers with a vehicle to source the best brightest and most exciting illustrators, photographers, graphic designers and animators in the business. The Alternative Pick sourcebook (1992-2005) became the outlet for cutting-edge commercial talent, offering a unique platform for artists to showcase their work. The Alternative Pick Deck (2009-2012) offered a fun and engaging format for locating leading commercial artists. In addition, The Altpick Awards (2003-2011) introduced yet another way to provide a platform for talents to shine. To meet the demands of an ever-changing industry, Altpick.com was launched in 1996 and presently provides a vehicle for talent to utilize the web to connect more effectively with buyers. As we mark our 30th anniversary in 2021, Altpick.com remains a premier source for creative professionals and we plan to continue to push the envelope providing the best vehicle for buyers to connect with creative talent.
View all posts by altpick connects →
This entry was posted in Photography and tagged amish, back 40 growers, farm, hilty, lottie hedley, stewardship, sustainability. Bookmark the permalink.